I wonder if we are ever aware of the lies that we tell ourselves? We find something destructive that we identify with or someone else tells us and we hang on to it. The worst part is believing it. What is truly interesting is how powerful these lies are that change our lives. 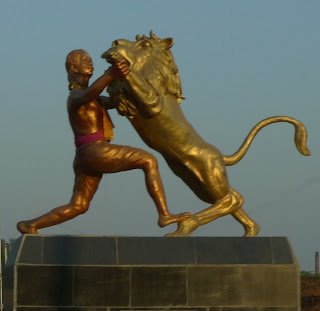 I was watching a TV show a few years ago and people who were hurt in high school by others were coming on the show to hurt the ones that hurt them. The sad part was that you could see that what ever the believed the other person said about them was true and they carried this opened wound for many years changing their lives for good or bad. What power we give away to others......

Most of the time the person who was brought in had no clue that they hurt someone else because of their own pain. Other times the person confronted was still carrying around some old baggage which was unleashed on the air as they lashed out. It reminded me so much of the wounded animals that used to be used as entertainment as they were fighting for their lives in a pin while other animals that were starving and trying to eat them. As you look around, what do you see?.......

The hardest part I think when one is clearing the old baggage out, is to be careful being around someone else who is in pain. When you are clearing out things they don't just go away but come up time and time again until you deal with them in a healthy way so you heal. That may mean that something may come up which might hurt someone else so be careful who you are around when you are clearing.

The whole point in growing is not to hurt anyone else and not to point fingers at someone, when we are all wounded from something.

If you are asked by someone else to help you then mirroring someone so that they see themselves is OK, if it is done in love, remembering that you to have things that you are dealing with to. Amazing, how learning to be gentle and kind is not as easy as we think but can be achieved with much effort.

Those of us who are learning to treat others "Not" the way you were treated when it was in negative form can change the world. Remembering what is a lie that we are holding on to and protect might not be something worth protecting in the grand scheme of things.....

How many times are you aware of yourself and others talking out of old wounds? What is it that makes you still believe a lie about yourself?? What is it in ourselves that we have to learn again to love ourselves unconditionally?

As I learn I have noticed that when I hear someone state something that I know is untrue it has no effect as I wave it off as information that has no power over
my thoughts when there are better things to think about. Still other times someone can make a simple statement that strikes the hart and hurts. By working through the process of learning if it is something really needs work or an untruth we can then heal wounds through our love of ourselves and others.

The full human ripple of how we effect each other is enormous on how it touches so many. If we were to act in love and to realise as we take control of our own personal power we could change so much in the world. And help with eliminating so much fear.