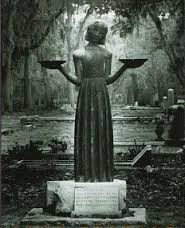 A few years ago as I was waking up and in that place of Twilight. I saw this image of myself standing in what I perceived at that time as hell. I was aware that my hands were up close to my shoulders open towards the heavens. Immediately I was reminded of the stature that is in the poster for the movie, "In the Garden of Good and Evil" While I was contemplating this I felt someone place an ice cube in each of my hands. Then I heard the voice of an angel that I was familiar with explaining that I was safe as long as the ice cubes didn't melt.

My awareness then settled on the images that surrounded me which were of great pain, and suffering. Toxic fumes blasted me with extreme heat that smelled so vile it took my breath away. Hopelessness wrapped it's self around my core sending a flash of fear that shot through me and as it did the ice cubes that were in my hands started to melt. When this happened I started to experience all the fear, pain, and suffering around me. I was also aware in that moment that my own thoughts and aguish were contributing to the horrors I was witnessing so that I was a part of what was happing.

That is when I remembered what the angel had said and for some reason I had a quick flash of my cat complaining about finding a spider in the house until we removed it. I could't help myself and started to giggle at how she doesn't like bugs which opened my heart with Love and forgiveness. A miraculous thing happened as soon as I saw this image, I noticed that the ice cubes were hardening in my hands freezing out the emotional fear and pain which departed quickly from within my body.  As I stood there a knowing came over me that as long as I held love and forgiveness within myself I was no longer contributing to what was going on around me nor was I absorbing it. Then a wave of compassion swept over me for what I saw happening around me which permeated from my soul. 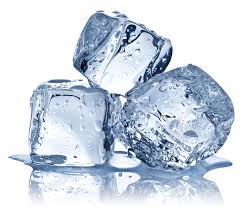 Again, I heard the voice of the angel saying "As long as I was standing connected with my higher self and the Creator in that space of Love, compassion, and forgiveness I could walk through the valleys of darkness and hold the light for myself and others." I was also reminded that, "We are all able to do this and when we remember from where we originally came from and stand in that alignment we remind others that we all have the choice to align ourselves into the Light. It is when we forget and become caught up in the darkness in the world that our ice cubes melt. "

I have had the commit from a few of my students that they have had days with not only their ice cubes melting but they evaporated. We all have days like that and what I like to say to this is that we have the ice cube story to help remind us where we are when we are in a difficult situation. The story gives us a gage when we are conscious that we do have a choice in how we connect or hold the energy of a higher space for ourselves and others.  I am not saying it is easy but the more we practice we go less into a vicim, contributor, or fear mode as we learn how to step into our own personal power.

Look around you and see where you are in the story and if your ice cubes are melting?
Posted by Ana at 10:54 AM