Into the Storm "Reprint"

A few years ago I made a ring for a dear friend before he went to the Philippines on a mission trip and when he returned I noticed he was't wearing the ring. Curious I asked him about it. He said that it had fallen off into the sea during a storm. 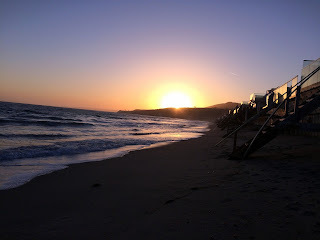 Interested in hearing more I asked him how that happened. He told me that he was out fishing with the fisherman in their canoes from the village he was staying at when they realized that a storm was quickly rolling over the horizon. His first thought was that they could out paddle the storm and make it to the shore since he could see the shore line from where they were. Instead the fisherman pulled in their nets and began to paddle towards the storm. Surprised he very quickly let them know that they were going the wrong way.  That was when the leader of the group piped up and said that they were too far form the shore to make it before it hit and the only way they had a chance was to paddle into the storm.

My friend who I would describe as a brave man told me that on that particular day he was tested and wasn't really sure that they would make it at all. There they were in handmade canoes paddling up and down the big waves moving through the ocean traveling through the storm itself. All he could do was to hang on and pray as the fisherman continued to paddle never skipping a beat. It was somewhere in the middle of it all that the ring slipped off his finger and was swallowed up by the ocean. 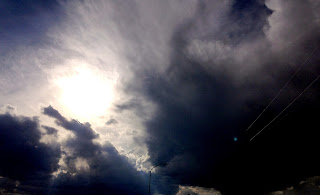 In what seemed like many hours he began to notice that waves got smaller and the wind and darkness fell away.  Looking up he could feel the calmness setting all around the canoes with an understanding that they had made it. They were safe and no one was lost. As they sat there in the water watching the storm behind them they saw it spreading over where the beach and main land was located.  He said it was a sight to behold as darkness moved through that space. Then it dawned on him that they owed their lives to the leader who made the choice that day to paddle into the storm instead of trying to out run it. Sometime afterwards he looked down at his hands and noticed that the ring was gone but knew that when he returned I would make him another one. I of course was very honored to make him a ring and happy to have my friend back with us safe and sound.

As I move through storms in my own life his story has stuck with me over the years.  Looking at different experiences I see situations where we all may want to run the other way or avoid something at all cost but in the end it always catches up with us, creating more chaos than just facing it. No one ever said that life was easy. And I see too that not only do the storms in our lives make us who we are but they allow us to look back with a knowing that we have really accomplished something once we reach the other side. It is in those moments that we know that we have truly lived our lives to the fullest.

Photographs by Ana
Posted by Ana at 1:57 PM