Often when I think about the "Shadow" it reminds me of a comic book character that I used to read with all my guy friends as a kid. They even made a movie of it. It wasn't until recently that I found out that there is a Shadow and that it is in everyone walking the earth.

Of course the first reaction is "thats is not true!"......But it is the truth. In each and everyone of us, we carry a side, that is our darker self or nature. I guess it is what we would say that the devil made us do it or feel things we so often deny because we are afraid of it. But truth be known, it is something that we should not be afraid of because like the character in the comic book it has something to teach us about ourselves.

The Shadow Self is something we cover up and push away and pretend it doesn't exist until one day we see that side of ourselves leaking out and fear creeps in that others will judge us.  I spent a few hours pouring out my own heart to an amazing healer and teacher in Taos, New Mexico, whom I had the priviledge to meet a year ago.  It was then that he stopped me in mid-sentence and told me that the Shadow that I was afraid of was the part that drove me to learn and succeed in my own life.  That without it I would have no drive and would sit somewhere quietly without the desire to move as I do. 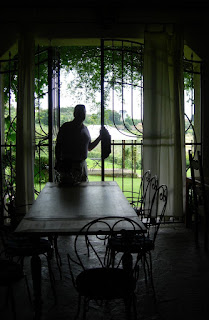 He said, that I should look at that side of myself and honor what it had to teach me by aknowaldge that that part existed.  It is as he said, by exploring the darker half of ourselves that we can find a way to use that energy as a positive energy in our lives in motivating ourselves and others.  By accepting who we are and what we carry inside, we grow both emotionally and spiritually as we move through our lives.
Yes, be aware that the Shadow has a negative side to it but by knowing that part of ourselves and learning about it, we tame the dragon living in all of us that can create so much good in our lives and others.
Many Blessings,  Ana
Posted by Ana at 7:10 AM